In April 2020, during the COVID-19 pandemic "lock-down" when the band members had to self-isolate and forego rehearsals for an unpredictable amount of time, a few band members got together virtually, recorded their parts to Green Onions, and sent them to David Friendly (band leader) for production and mixing.  Click on this link to hear the final product.  Remember, each part was played in isolation and we did not know how many solos there would be until everyone had sent in their contributions.

The East Coast music world lost an angel of a singer in March 2020 as we saw the passing of Laura Smith, to cancer.  She was comforted by friends at the end.  Laura made her comeback to music in 2012 after a serious injury almost ended her career for good.  She chose the Mahone Bay Legion Swing Band to get her chops back and we are forever grateful for the memories of her singing over our playing.

Michael O’Connor was the driving force behind the Mahone Bay Legion Band since it was formed in 1984.  Rumour has it that it all began with some musical instruments that were spirited away from somewhere and mysteriously found their way to the Legion Hall.
Back then, it might well have been called the O’Connor Family Band.  There was, Michael, the leader; his son Michael on saxophone; his daughter Kathleen, clarinet; and son Tim on trumpet like his dad; and, in due course, Meghan on vocals and saxophone.  The O’ Connor’s were a full-scale orchestra all on their own!
As leader, co-director, player, organizer and Legion Liaison officer, Mike’s goal was always to ensure the band had music to play and a place to play it.  If, by accident, someone else were credited with his hard work, it was of no concern. “The important thing the job got done,” he’d say.
Back in the band’s marching-concert days, he made sure guest performers had all the sheet music they needed. If someone played an unfamiliar instrument, a flute or an oboe, he’d spend a great deal of time transposing music even for someone just passing through town.  In the last few years, he created "short scores" of most of our swing tunes that the band director uses for rehearsals.
Remembrance Day was very important to Mike (as it was for the band’s founder, the late Phillip Smeltzer, a Second World War merchant mariner and army drill sergeant).  Last November 11, at age 79, Michael marched while playing and holding high the heavy brass cymbals --a taxing job for even a strong young man.
Michael O’Connor did it all, as he said, because he loved music, loved teaching music and he loved the group.  The feeling was mutual, and to say he will be missed is a significant understatement.  Thanks Mike for letting us share your joy of music in a band you did so much to create, develop and ensure its survival through these past thirty-five years.

Our Next Public Performances

Rehearsals are held every Thursday at 7 pm.  New members welcome.
​As long as the weather holds, we will rehearse Thursdays from 6:45-7:45 at the Mahone Bay Bandstand, recently renamed for the late Michael O'Connor who was instrumental in both the founding of the modern Mahone Bay band and the building of the bandstand structure, which was recently refurbished.

The Mahone Bay Century Dance has been postponed indefinitely due to Covid-19 crowd size restrictions.  Maybe in the fall?
Our one-hour summer concerts in the Mahone Bay Bandstand (across from BMO) are held every Thursday at 7 pm through July and August.  Our schedule is wide open for gigs, if you are looking for a big band for your event.  We inject energy into every note!
​
​Watch this space or go to our EVENTS page for other performances, as we get hired to do them.
Like to dance?  Want to learn more about swing dance steps.  Meet like-minded people through Meet-Up: Dancing in Nova Scotia
If you are interested in hiring the band for a special event (birthday, wedding, street party), check out our Events/Book The Band page.

Is it a trumpet or a saxophone?


If you can tell the difference, you may be the player we are looking for.  We are accepting new members in most sections.
​Contact the Director via e-mail>> and join us now.

Currently looking for trombones, trumpets, tenor saxes.  Some summer visitors love playing with our band while they are in the area, but come September, we have vacancies in all these sections.

Need a challenge?  Students aged 14 and up are welcome.  Come and try it out.  Grow your talent with us.

Why Not Join Us -- Here Are Our Current Vacancies 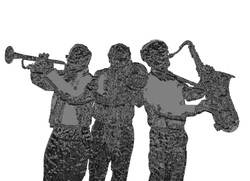 The band rehearses every Thursday evening from 7-9 in the Legion at 21 Pond Street (except when we are on the Bandstand).Other vacancies will be posted here as they come up, but it never hurts to ask.
Photos on this site are by: David Friendly, John Cunningham, Richard Novossiltzeff, Karen Janigan, Maureen Moffatt and Peter Zwicker
Powered by